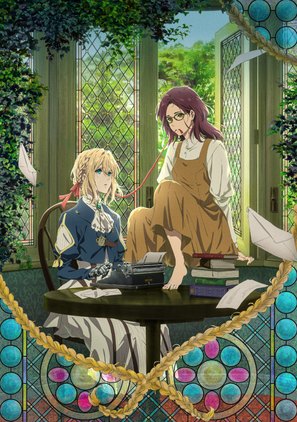 The Violet Evergarden universe has captivated anime fans with its breathtaking artwork and emotionally charged plots and this new standalone chapter in Violet’s story is no different. As the first feature to be released by legendary Kyoto Animation (A Silent Voice, Liz and the Blue Bird) since the tragic arson attack on the studio in July 2019, it’s only fitting their resilient return is a beautifully understated drama dealing with grief and the complex emotions that often accompany great tragedy and strife.

VIOLET EVERGARDEN: ETERNITY AND THE AUTO MEMORY DOLL reunites the television show’s directors and cast—including Yui Ishikawa (Attack on Titan) as Violet—for the first feature film in the Evergarden series. After returning from war, ex-soldier Violet Evergarden takes on a job ghostwriting letters for strangers. Although she struggles with her emotions, interpreting the feelings of others into the written word helps Violet come to terms with her own loss. Two conjoined, but separate stories introduce new clients: Isabella, a forlorn heiress desperate to escape the confines of ladylike expectations, and Taylor, a young illiterate orphan who enthusiastically dreams of becoming a postman. Violet’s compassion for her new friends, along with stunningly detailed animation and a stirring score, crescendo to moments that will tug on heartstrings and leave audiences with bittersweet tears of both joy and despair.

Dobra Tea will be serving samples of properly made Matcha tea before the screening of the Pittsburgh Premiere of VIOLET EVERGARDEN: ETERNITY & AUTO MEMORY DOLL